After a long week of raising the stakes it seems that the anti SOPA/PIPA activists have won the day. On Friday January 20th, Congress dropped the bills in the wake of the largest online protest in history. An incredible 13 million people took time to fill out a petition to implore congress to oppose the bills in order to keep the internet free of censorship. You can see the astonishing numbers here.

This activism, alongside the web “blackout” on Wednesday by 1,000s of websites including Wikipedia and Reddit, was unprecedented.  Even the MPAA (one of the largest lobbies for the awful bills) was shocked having previously considered SOPA and PIPA a “slam dunk.”  MPAA Chairman and former Senator Chris Dodd told the New York Times in a statement that “this was a whole new different game all of a sudden.”

“This is altogether a new effect,” Mr. Dodd said, likening the online community’s response to the Arab spring movement. He even went so far as to comment that he could not remember seeing “an effort that was moving with this degree of support change this dramatically” in the last 40 years. 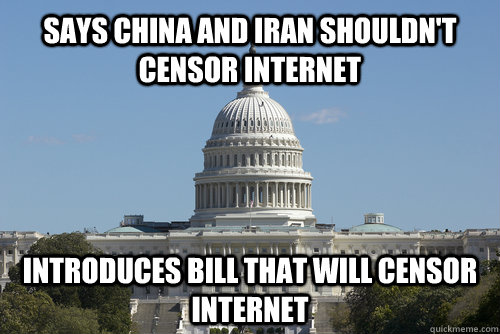 Even China, where a site called Weibo, similar to Twitter, has a team of censors on staff to edit or delete posts with sensitive political content, marveled at the American response to online censorship. Reminding us the importance of internet freedom and prompting commentator Liu Qingyan to write, “We should learn something from the way these American Internet companies protested against SOPA and PIPA. A free and democratic society depends on every one of us caring about politics and fighting for our rights. We will not achieve it by avoiding talk about politics”

And while those who were against these bills (like myself and the rest of my compatriots here at pnosker.com) can take a breather and celebrate a momentous victory I do want to stress that this was only the beginning. The intent that originally formed these bills and the money that corrupted the politicians to support them is still out there. I fully expect a bill like SOPA and PIPA to return to Congress, but this time the entertainment industry will know the power of the online community and I’m sure will take special precautions to make sure the same thing doesn’t happen again. This is why I hope Congress will heed the words of Internet activists (as well as the White House) in starting over to gauge the true scope of the issue of online piracy and redraft a legislation that consults experts who understand how internet technologies work.

It seems that Anonymous was right, that “our power [was] too strong. Soon [they would] have to listen to the people. This [was] a time of action.” We did not sit and watch nor did we sit and cheer, we were not silenced.

But at the risk of repeating myself I do want to emphasize that this type of legislation will be back so long as Hollywood has the money to lobby our government and corrupt our leaders.

Borrowing again from Anonymous, I urge you not to forgive and not to forget. Expect them, for they will be coming.

What are your thoughts on copyright reform? Post them in the comments section below.