Wow, does time fly!  It may be hard to believe, but today (November 15, 2011) is the 10 year anniversary of the original Xbox’s launch.  10 years might not seem that long in the grand scheme of things, but think about where you were 10 years ago (I was just starting 9th grade in high school, compared to being a 3rd year graduate student now) and you will quickly get a sense of how long a decade really is.  That Microsoft’s Xbox lasted this long, especially in light of it’s direct attack on established players Sony and Nintendo, is a testament to the quality of the machine and to Microsoft’s massive marketing power.

The Xbox was my first top-tier video game system.  Yes, I received the Nintendo 64 for Christmas a year or so prior, but only after it had been released for over three years.  I had never been able to purchase the top-tier video game system at full price right at its debut.  In early November of 2001, my twin brother Matt and I had a conversation with our mother and uncle.  They would purchase us an Xbox and a few games for Christmas, but that meant that we would not get any other gifts.  After pondering for a little while, my brother and I decided to accept the Xbox.  It ended up being a great decision.

Of the several launch games we received (anyone remember Dead or Alive: 3 and Amped?), by far our favorite was Halo: Combat Evolved.  It was ridiculously fun to play, and not too hard to beat on some of the easier difficulties, while still remaining a challenge.  Over the years, we purchased additional games (a few Madden iterations, Halo 2, NBA 2K4, etc.)  The final two were great to play online using Microsoft’s Xbox Live service (which I’ll talk more about below).  Overall, our Xbox got a ton of usage and lasted all the way until last year, when the power supply stopped working.  It is probably an easy fix, but by this point I was in grad school, the unit was still at my old home in New Jersey, and I sort of grew out playing video games (sucks to be an adult, huh?).  There were a lot of great moments of gaming done on that machine (and the occasional controller throw… hehe), and you could say that my usage of the Xbox closely mirrors my transition from a high school student, to a college undergraduate, and now to a graduate student.  The machine and I made it through the Sony fanboys’ insistence at saying “Xbox sucks c****” to me in high school – of which I still laugh about. 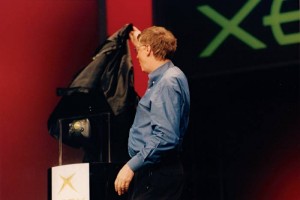 My own anecdote of the Xbox first being ridiculed, then embraced, and then dominant closely mirrors the arrival of the original Xbox ten years ago.  Sony’s PlayStation 2 was flying off the shelves, and actually continues to be sold.  Nintendo’s GameCube had just launched a few months earlier, and was met with solid success.  With the failure of Sega’s Dreamcast, a lot of so-called experts within the gaming industry didn’t think there was any more room for another major console.  Even one that would be backed with a multi-hundred-million dollar advertising campaign.  But ultimately, after selling of 24 million units worldwide, those same experts would be proven wrong.  Of course, this 24 million in total sales is enormously trumped by the PS2’s ~130 million and counting in sales.  But where Microsoft and the Xbox would take off would be its next generation version, the Xbox 360.

One of the questions that has always puzzled me is why the PS3 sold so poorly (at least relative to the PS2).  The $600 initial price likely scared off many potential customers.  With Microsoft’s Xbox 360, consumers got a unit that survived its initial launch, had a great game selection, was at least $200 cheaper, and had a viable online gaming service in Xbox Live.  Microsoft was certainly not the first to attempt an online gaming service (anybody remember SegaNet and Phantasy Star Online?), but it definitely was the first to capitalize on the concept.  Having a centralized online space in which gamers could play any compatible game (and pay one fixed price) was a smart decision, as compared to having individual game studios run their own servers.  The emergence of widespread broadband internet service around the launch of Xbox Live in 2003 certainly helped with Live’s success as well.  To this date, Xbox Live can claim over 30 million users, which is quite remarkable and a great success story for Microsoft and the Xbox. 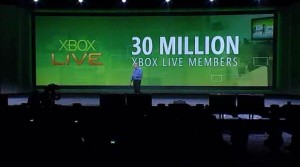 One final success story of the Xbox is the launch of Kinect, the motion sensing device add-on to the Xbox 360.  Designed as a response to the immensely popular Nintendo Wii, the Kinect was a high-risk, high-reward innovation for the Xbox 360, and thankfully for Microsoft it ended up being a major hit.  In January 2011 at CES 2011, Microsoft announced over 8 million Kinect devices had been sold, and that number has now climbed to over 10 million.  The Kinect has expanded the customer base of the Xbox, with popular game ideas like Wii Fit able to now be ported (at least in spirit) to the Xbox 360.  Not to mention an entire crop of “Kinect hackers” popping up that are able to do robotics innovations with the cheap motion-sensing camera, feats simply not possible several years ago. 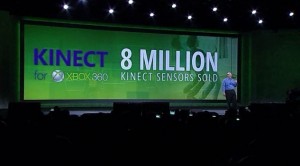 Steve Ballmer at CES 2011 announcing over 8 million Kinect devices sold. (This number is now at 10 million)

The Xbox has had quite the decade of success.  Microsoft’s ability to successfully launch a new major console in the face of intense and establish competition, keep that console in demand for an entire decade, design and release innovative products like Live and Kinect, and finally pass some of those same competitors in terms of sales, is nothing short of remarkable.  And it looks like Microsoft is fully here to stay, as the rumor mill is churning with reports that the latest version of the Xbox will be announced at CES 2012.  A bunch of pnosker.com staff members (including myself) will be live on-site at CES 2012 in January, so definitely stay tuned to pnosker.com breaking news live from CES 2012 about this rumor.

Michael Convente is the Associate Editor at pnosker.com. In addition to his editing and writing duties, he is also a current fourth year Cell and Molecular Biology graduate student at the University of Pennsylvania, where he is working toward a PhD. When not working hard in the lab, Michael uses his free time to read the latest news and trends in tech and also review tech products, with the goal of providing the best in tech news and reviews possible to pnosker.com readers.