If you’re an Apple Magic Mouse user, you probably go through a lot of batteries. It takes significant juice to power a mouse that scrolls 360 degrees and has one- and two-finger swipe actions. Remembering where you put your fresh batteries is yet another thing to keep track of in your busy life. Sure, you could use rechargeable AA batteries, but then you’d have to keep track of the charger instead.

Magic Mouse users now have another rechargable power option: the Magic Charger, an inductive charger made by Mobee Technology. With the Magic Charger, not only will you stop needing to look for batteries, you’ll also be saving the environment. 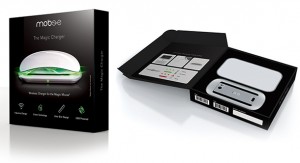 The Apple-like svelte packaging is as beautiful as it is practical. The battery pack and charging station fit securely without waste, and a simple guide to the different LED indicators is printed on the inside cover. The battery pack combines the battery and metal plate, and it easily locks into place in the mouse. I’m at a loss, however, at what to do with the stock metal battery cover now that I no longer need it. Maybe this is asking too much, but I would have loved a tiny plastic case or drawstring bag to keep it safe.

Starting a charge is simple. Just plug in the charging station, place the mouse on top of it. The charger and battery pack are magnetic, so they snap to each other and stay put. Full charge time is listed at 6 hours, and I found that to be accurate. Oddly enough, I noticed the battery recharged faster if detached from the mouse, which goes against suggested use based on product imagery. This was a frustrating discovery, as it’s extra work to continually remove the battery pack to recharge.

While the Magic Charger battery life was respectable considering my power usage (around 10-12 hours a day), in my experience traditional AA batteries last longer. Additionally, the battery percentage indicator was all over the place. After a full charge, the indicator would display 100%, but after use it would unexpectedly drop to 6%, disconnecting the mouse from Bluetooth. The battery life might be accurate (I don’t have a way of knowing), but the lack of progressive percentage decline is beyond aggravating. One moment you think you have a full mouse, and the next you’re rushing to find a spare battery pack (if you bought one) or traditional AA batteries.

In the end, the Magic Charger is a valiant effort in green energy technology. Its ease of use and convienence make it a good option for Magic Mouse users who want to trend away from traditional batteries. However, key frustration points, like a wildly fluctuating battery life indicator, make me less enthused. As such, I recommend the Magic Charger with reservations. Make sure you buy an extra battery pack if you buy the Magic Charger, as it will make your experience consideribly more enjoyable.

Matt Convente is a contributing Digital Media Editor at pnosker.com. He specializes in reviewing Apple products, accessories, and software. Outside of writing, Matt is the lead front-end developer at Grovo, an online education and training platform whose online video courses cover the most prevalent web sites and apps.