What do you get when you take one part Braid, add a dash of Transformice, and top it off with the Playstation Move? Funky Lab Rat is a new physics based platforming-puzzler recently released on PSN by French developer Hydravision Studios. This release also adds to the growing list of Playstation Move enabled games available, but it can also be played completely with the Dualshock 3 controller. For this review we will be playing through with the Dualshock 3 controller. 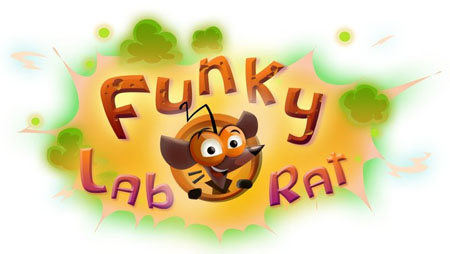 From the start of Funky Lab Rat you'll notice that Hydravision wanted to give players a very easy to pick up gameplay experience with later levels ramping up the difficulty of the puzzles (and let me tell you they get incredibly challenging). The story is nothing special with players taking the role of a pill-popping lab rat named Diego. The goal is to escape the lab by completing 81 levels over 10 different worlds while collecting pills along the way. These pills open new worlds to explore, unlock trophies, and reveal secrets. Other than that, don't expect any groundbreaking depth to the plot. Funky Lab Rat is all about the puzzles.

Controlling Diego is one of the strongest parts of the game. Simply maneuvering your courageous rodent is extremely tight and never responsible for any frustration. The first world introduces Funky Lab Rat's distinct gameplay mechanics to the player which include pausing time to manipulate objects in the world, rewinding time to wash away the blemish of death (either immediately or by restarting the level), and zapping or skipping the current level. Besides pausing and manipulating objects in the world, these features are more of a way to keep the gameplay continuous. Once players reach the more challenging puzzles, these become essential and convenient for progressing through the game. Diego also wields a flashlight which looks strangely like a Move controller in the trailer. This feels somewhat tacked on as it has little influence on the puzzles other than clearing clouds from some pills and opening the gate at the end of each level. 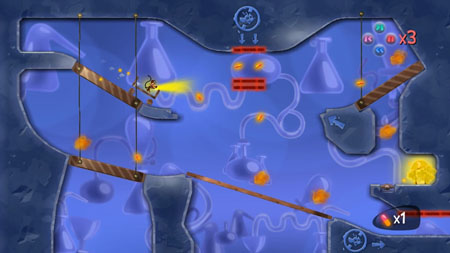 The physics in Funky Lab Rat coordinate very well with the movements of Diego. Whether it be propelling your rat through the air with a springboard or rigging a simple car to ride down a hill, players will easily grasp the particulars of the physics and how to manipulate the environment to work for them. These methods will be needed as Hydravision has done a great job at designing levels that can be overcome in many ways. The more difficult levels will require a lot of trial and error, but the well setup control scheme makes this an enjoyable experience.

Puzzle junkies should absolutely pick up this title.  Although the story leaves much to be desired, the colorful cartoon style and smooth/unobtrusive background music creates the perfect atmosphere to get your puzzle fix in. The well-polished physics and controls ensure that the only frustration you will receive from Funky Lab Rat will be when you become stumped over a puzzle. Funky Lab Rat is available now on PSN for $9.99.