Why Am I Still Playing NHL 11?

NHL 11 doesn't seem like it's much different from most other sports games. Its gameplay is probably the best out of any one out there right now but it has its share of problems just like any other game. It's not as if this game is 100% completely awesome and I just can't put it down. For whatever reason, I just keep on coming back and coming back and coming back. Therefore, I'm going to try and do an exorcism of my own mind to figure out why this is going on, how to correct it and whether I actually want it corrected. Oh and if I'm a complete lunatic. 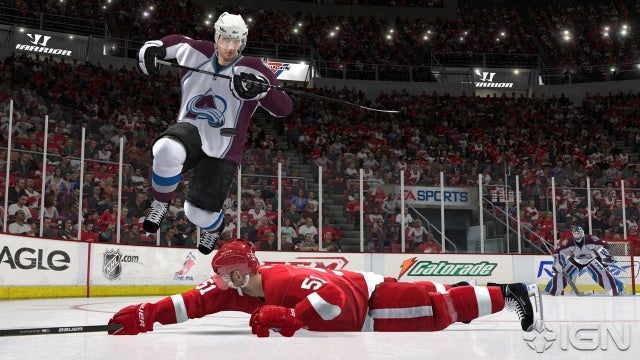 Hockey season just started a little less than a month ago so that's the natural reason it would seem that I keep playing. Storylines are just starting to unfold throughout the NHL like the Devils being awful, Buffalo being worse and Tampa Bay actually being good (thanks to the Phenom Steve Stamkos). Head shots have become the main issue but lucky for me they're still legal in the video game so Joe Thornton has free reign in my virtual playground. You'd think this would be the reason right? Nope.

Sure I've followed hockey so far and read the Puck Daddy Yahoo blog religiously but I've only watched a very small amount of games due to forgetting/lack of time/the Devils making a mockery of the sport. I've unquestionably been watching much more NFL and college football but still haven't touched Madden or NCAA in months despite them both actually being much improved this year. Something is making me keep pick up NHL and not anything else.

I've currently got EA MMA waiting to be reviewed, and I've played it a little, but I still just keep playing NHL no matter what. The same happened when I had Pro Evolution Soccer sitting around. Yeah it was there and it was free but it still wasn't NHL. I mean those games are both pretty good, not really fantastic by any stretch of the imagination, but more than playable. Madden and NCAA are even better than both of those and their media stories, whether they involve Cam Newton getting illegally rich or Brett Favre's lack of length, are getting much more play in the world. I would usually think it would be fun to face Brett Favre and beat him four inches into the dirt but something is just off about it this year. Not the game, just me. Something keeps bringing me back to NHL…

Now it's obviously the best sports game I've played this year with the Show being the only one that came close. However, I barely played that this year and haven't played a baseball game so little since the Triple Play Error. It was a fantastic game by all means and had a great franchise mode, something that I'm admittedly a sucker for. NHL has this going for it as well and guess what, baseball gets much more media play and I probably know more of the players. Even more similarly, for the first time in a while, I hardly watched any baseball this year just like the NHL. But something different happened. Despite both having great franchise modes, great gameplay and me paying a similar level of attention to the respective sports, I barely played the Show and have been tearing up my NHL. At this point I just wanna know what's going on.

It could just be that I like the sport of hockey better than all the others but the fact of the matter is that football is by far the easiest to watch on TV and probably translates the best to video games as seen by Madden's dominance over the field. Baseball's always been special to me as well as those guys keep you company over the summer and give you something to do nearly every single night. Hockey is exciting sure but not any more so than the other sports. There's just gotta be something about this game.

The franchise mode is really all I play when I pop the game in. I'll only play games in the context of that mode such as when my team gets to the Stanley Cup Finals or just when I try playing a whole season myself. I've never gotten farther than thirty games in. Why? Because I just start a new franchise and do it all over again. I think of new players I might want on my team or similar players in different combinations. This happens in every sport though but one thing, I think, separates the NHL from the other sports: sheer volume of similar players.

Whether I want Milan Michalek, Ilya Kovalchuk or Sean Avery on my left wing, their stats are going to be completely random seemingly every year so you'll never have the same production twice from the same player. I've had Kovy go 50-50-100 or sometimes just score 20 goals. These things happen randomly within the game so I really never know what's coming next. And even with 20 goals, he could still get 50 assists and have a decent season. Production is pretty much the same for most QBs in the NFL and there are similar thresholds for most players in the NFL and MLB so I really just get bored or upset if certain levels aren't met. In hockey there are just more players going for similar stats but will completely randomly get there. Your third RW in hockey may score 30 goals or 10 or 1. You never know. You know roughly what the starting running back will get in the NFL.

This randomness also transfers over to the results of your team. You can never predict how your team's going to do as different combinations of players will produce different results. You need to keep trying different combos because you have to fit together playmakers, snipers and two way forwards. It's up to you to make the most interesting combos out there and you'll never know if they're going to work until you start the season up. Things never happen the same way twice in NHL 11.

And I think that's the reason I keep coming back. Most stats are relatively the same in other sports games but they change on the fly in NHL. It's never the same season twice and maybe, just maybe, that's why I love NHL. MVP Baseball used to be like this as well, but the Show has made some guys always do well in simulation and others always be terrible so it gets stale after awhile. In NHL Nicklas Backstrom can get 100 points or just 40. You never know.

This is my love letter to NHL. Don't ever change what you're doing EA Canada. This is the best sports game on the market by far and I hope it stays that way for years to come. I really love this game.