Wireless computer peripherals can really be a cruel mistress. Bluetooth devices are starting to cut into their market place and with Tablets like the iPad 2 not even having USB for normal wireless kinds, we could very well be seeing the end of wireless mice and keyboards. So companies like IOGEAR are trying something different. They're marketing to gamers with their keyboard as systems like the Xbox 360 and PS3 chiefly use wireless devices. It's a market that hasn't been exploited and IOGEAR is trying it. And here's our review of the IOGEAR Wireless Compact Keyboard! 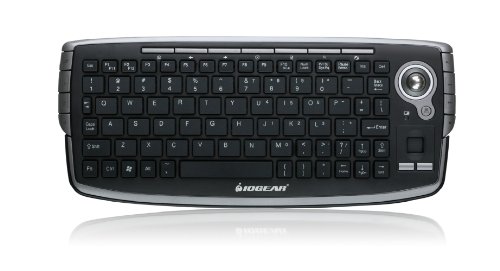 This may be my least favorite keyboard I've ever used. There have been others that I just have had trouble typing with just because they're small or designed for something else. This is designed for gaming I think. I'm not really sure. There's a built in mouse on the keyboard but I guess that's for normal PC users since gamers usually don't use mice and it has no use on a PS3 or 360. There are also media buttons which again sends a sign toward PC.

But I would guess gamers would use this for first person gaming. I'm not a nerd so I don't do that but the keys are so weirdly placed that it's hard to use. I genuinely had a hard time finding how to type J because a 1 was also on the key. Maybe I'm dumb but I don't think I should have to push Num Lock to use J. That's a problem. I had a very unpleasant time typing on the keyboard.

Setup is easy as you just put in the included AAA batteries and the USB receiver and you instantly go. I've had problems with wireless mice (review to come!) with setup but this was remarkably easy. Unfortunately that's really the only good part of this. I consider myself pretty good at typing at this point ever since Computer Apps at Wood-Ridge High School but I really couldn't do it. Firs the Num Lock through me off and then it was the spacing. It's as if they made the keyboard even smaller than a Netbook one just so they could include the Trackball mouse thing. It's probably not actually that small; it just seems that way. There's too much spacing. The keys themselves should be the focus here but they take a backseat to the included mouse.

The mouse works fine. There's a scroll wheel and left and right mouse buttons. It works fine. Again, everything WORKS on this thing. It's really easy to set up but it's just not well designed. The spacing and positioning and size is just off. Unfortunately I just can't recommend this wireless keyboard.