The fourth iteration of the famed Yakuza series hit shelves last week and we recently got our reps in during our spring break. This game may remind you of one where sailors are abound but fear not gamers, this is not some redheaded step child of Shenmue. This is Yakuza 4 and I must say, it's rare to see a game structured like this. Keep reading after the jump to see if that's a good thing. 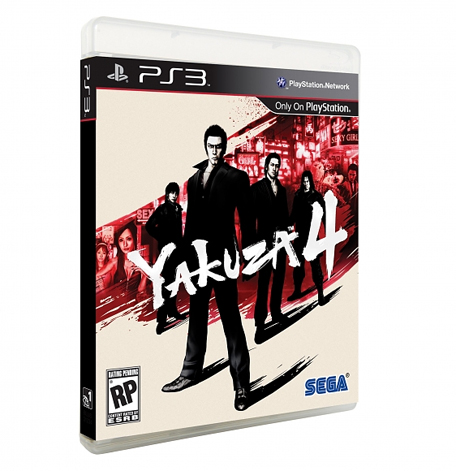 Here's a short disclaimer to start: I've never played nor heard of the Yakuza series prior to receiving this game in the mail as a review copy. After doing some hardcore Wikipedia research I found out that this is in fact the fourth iteration of a series I didn't know about, not some random marketing strategy to make a game seem popular by being the fourth despite really being the first. As confusing as that may sound, it seemed plausible to me. So now onto the actual review of Yakuza 4.

This is a very strange game. It feels like it's a DS game being ported to the PS3. Outside of the cut scenes, there's no voice acting at all. As a matter of fact, I was studying while my brother played the normal gameplay. There are just text boxes. No sound. There's barely any sound at all. It's almost eerie. Now it seems a little strange to mention this first I'll admit but the atmosphere and story are what are supposed to drive Yakuza 4. They don't.

The story's kind of convoluted and very Anime-esque. Japanese media ported to the United States, outside of the first season of Digimon, hasn't exactly been known for its story telling. People are interested in action and martial arts and the like. There is fighting in Yakuza 4. It's decent. It feels like a kung fu movie where each guy is coming at you one at a time. This works ok I guess when the game is trying to emulate a movie, as this clearly is, but can get pretty boring when you're playing a game.

From what I've seen, most of this game consists of running around and doing nothing of any interest. Again, it's supposed to be like a movie except the boring parts are still in. You walk from place to place. Exciting. Then you find a save point inexplicably placed inside a phone booth. Those are extremely rare by the way and the game doesn't tell you how to save until you're an hour in. Then you sit through the cut scenes.

The Metal Gear Solid series has long set the standard for the cut scene/gameplay ratio but that now has to be reevaluated. Yakuza 4 blows it away. You actually have to turn on the option to skip these cut scenes or beware, you're going to be stuck in a mediocre story for hours on end. They just keep going and going. Again, they want a movie feel. Unfortunately every other game I've played like this put you inside the movie. Yakuza makes you watch the movie, which isn't very good, and then lets you occasionally take part.

This series must be popular in Japan because I've never heard of it here though apparently the third game came out just a year ago. You figure somebody must be buying it if it's gotten to four games.

But the main criticism I've heard of this game is that it is too close to the third one in style and gameplay with nothing new added on. But that would imply that there was something to like about the third one. If it made it over to this one, as those reviews would have you believe, both my brother and me couldn't locate it. There doesn't seem to be much redeeming about this game.

Maybe in Japan the Yakuza is so badass that the story somehow has more oomph. Maybe. But unfortunately I feel like they would just get schooled by American gangs based on this game to it didn't translate to me. This game just wasn't for me and doesn't seem to have any redeeming qualities but that's just one man's opinion.

Stay tuned to pnosker.com for your tech news and reviews and follow me on twitter @mtorino75. I'll have a review of Mario Sports Mix coming this week!