If fifty years ago someone said that you could have better quality sound out of something smaller than a quarter than the Admiral Stereophonic 3-channel Hi-Fi radio which was regarded as one of the top units at the time, nobody would believe you.  In fact, you might be shunned for saying something so ridiculous.  Well, I have not actually heard the Admiral Stereophonic radio as there are only a couple around anymore, but I can say with almost complete certainty that the Head-Direct RE0 earbuds sound better. 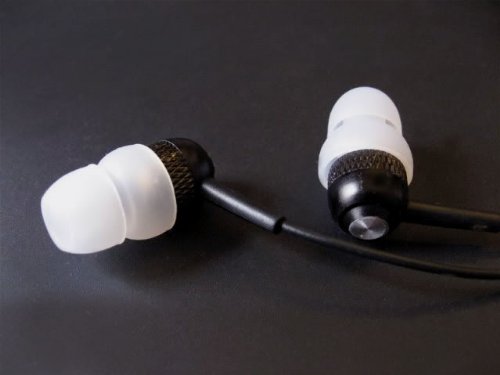 No, they are not custom molded or packed with two, or three, or even four drivers per ear.  They don't have a high end crossover network integrated into them, and they also aren't the most classy looking earbuds either.  They are built from metal and plastic and may contain just about the best small dynamic drivers in the world.

That's saying a lot, too, since there are plenty of respected In Ear Monitors with a single dynamic driver.  The Sennheiser IE range is known to be some of the best dynamic buds in the world– and they better at $249-499.  Still, the RE0 sounds fantastic and will really give the IE range a run for the money.

My main fear before listening to the RE0 was that they would sound muddy, too bass heavy, and without a good soundstage.  All three of my fears were gone as soon as I plugged them into my iPhone and gave my music a good listen.  Yes, you could tell the difference between these and the Ultimate Ears 700 earbuds.  Were they any worse?  No– not at all.  Over the next week or two, I noticed several subtle changes in the sound output.  With the burn in time, the sound became more clear and the soundstage really opened up.  I could really "see" the instruments move over time.

Over the course of the last month when I have been listening to the RE0 units heavily, I have developed a deep appreciation for Head-Direct's engineering team.  They really made a quality product.  The best part was that the RE0s retail for only $79!  After dropping in price several times from over $199 to below $80, the kinks have been worked out and you really can't go wrong with the Head-Direct RE0 earbuds.