Since we're lost in the doldrums of late summer and there really aren't going to be any big time video game releases in the near future, I thought it would be a good idea to go through a list of video game movies and how they work in general to see why they are all uniformly terrible. Sure there have been a few exceptions but they have been very few to say the least and it really doesn't look like anything's going to change any time soon. 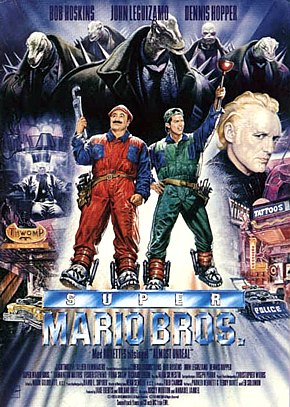 When you look down the list of Internationally released movies based on video games, there is a list to the right of it that lists all of the Rotten Tomatoes ratings for these movies. As only the most astute reader will notice, no rating is above 43%. Now for all new to movie reviews out there, 43/100 isn't exactly Citizen Kane. That's in the neighborhood of the Expendables, a movie that's pretty much only liked by dopes like me who will watch anything written by Sly Stallone but exactly nobody else. In case you didn't catch my drift, video game movies have been universally terrible outside of Final Fantasy VII Advent Children, which wasn't theatrically released.

But why exactly is this? There have been a ton of video games out there lauded for their fantastic storytelling above all else in the game. For example, Shadow of the Colossus doesn't exactly have God of War caliber gameplay but it does deliver in terms of aesthetic and story. The list of games like this goes on to others like Ico and KOTOR amongst many others.

Unfortunately these aren't the games that are being made into movies. Quick is there any kind of decent story in Doom? Of course not. Has it even been relevant really in the last ten years? No not really. So what's the natural progression? Movie! Sure it's unintentionally hilarious but so's the Expendables which even I will admit was pretty terrible. It made Snakes on a Plane look like Casablanca. It makes Teen Wolf look like Wizard of Oz. What I'm getting at is it's awful.

When you keep going down the list, there are other classics like BloodRayne, DOA and the grandaddy of them all, Super Mario Brothers, which started this unfortunate trend. Maybe BloodRayne would've done better in today's Twilightized society, but people like it for the story and characters, not the scantily clad vampire. DOA has nothing even resembling a B movie story within the game and Super Mario Brothers would seem to lend itself to a complex plot with the intensity of going left to right on the screen with virtually no dialogue but alas it didn't happen.

They're basically just picking games that really don't lend themselves to the cinematic format. People love games like Halo and Gears of War not for the characters or graphics but for the gameplay. They care to some degree what Master Chief's 5 lines of dialogue are but really care much more about dual wielding and beating Legendary Mode. Gears of War is more focused on the Chainsaw than Phoenix's foxy stubble and whatever drivel comes out of his mouth.

The stories of these games are basically just background for blowing people's heads off. Maybe in the 80s when movies like Rambo and Mad Max ruled the screens these films could've done alright but today more artsy kinds of original movies rule the roost. They're essentially just taking games with a story that's not essential and try to make that the main part of the movie. People play to do it themselves. The fact of the matter is that movies are carried by story much more than games. Halo can have a D level story as long as the gameplay is awesome but if a movie has a completely cliched story like pretty much every video game movie, it's probably going to fail critically and publicly.

So really what is there to do about this? Obviously if you didn't get it already, they have to start taking games with decent stories. They started in the right direction with the Prince of Persia but unfortunately handed the reigns to Jerry Bruckheimer. If you've ever watched CSI Miami, you'd know that story isn't exactly his forte (YYYYYYEEEEEAAAAAHHHHHHHH!). I realize they're probably not getting Scorsese or people of that established ilk, but they're going to have get guys like a pre-Dark Knight Chris Nolan or even Edgar Wright of Scott Pilgrim fame who took a video game-esque storyline and made it interesting and loved by whoever saw it (though it was very small in number).

You have to take games like Ico and Shadow of the Colossus that have great stories. Even if they aren't that popular, word of mouth will get around and they may not be the most successful, but they will provide a solid first step.

I've long maintained that instead of the last 3 Star Wars movies, Lucas should've made a series based on Knights of the Old Republic, which had a much better storyline than the prequels. Plus no Jar-Jar. The saga of Darth Revan blows out that of the origins of Darth Vader.

So there are games out there that have the potential to get things done at the box office. Whether they start off with more artsy games or for more established brands a la KOTOR, they simply can't keep going the same route.

Previously all these failures were blamed on Uwe Boll for not having any filmmaking  skills, but even when people with more skills like Bruckheimer get involved, the movies still turn out terribly. Something has to change or we may never see a good video game movie at this rate, which is a terrible injustice to games with great storylines.

Stay tuned to pnosker.com for all your tech news and reviews. Follow me on Twitter @mtorino75 and keep reading for my Sports Gaming Digest and NHL 11 coverage starting next week.