NHL Games of the Current Generation

If you would've told me five years ago when the Xbox 360 came out on the heels of the greatest run of Madden and Fight Night's emergence that my favorite game series of the next generation would be  EA's NHL offering I would've laughed and laughed. The PS2/Xbox run was littered with problems and possibly the worst sports game since NBA Live 2004 but oh did the series rebound. Here's a look at how NHL games have fared over the last 5 years. 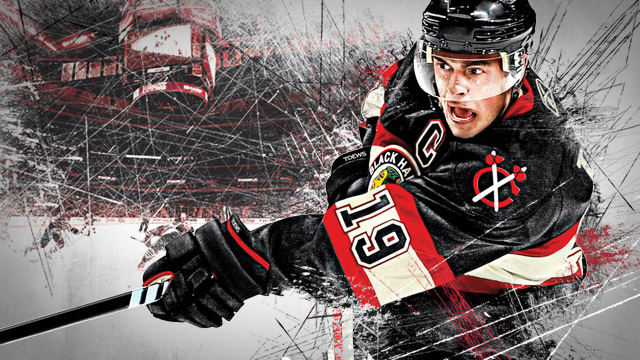 2K was the only company to release a game for the first sports gaming year of the 360 with NHL 2K6. It was basically just a port of the PS2 title with slightly better graphics that were pretty much only visibly different in HD, which pretty much nobody had at the time. EA decided to sit that one out and just try to build up the their franchise from ground level like they did with Madden and NBA. Except the difference was that this series would actually be better for it.

It really all starts with the MVP Baseball buildup theory. EA Canada again followed it to a t.

Starting with NHL 07, EA introduced the skill stick which allowed you to more naturally deke and shoot the way you want with the right analog stick. The graphics weren't that great in terms of player models, but the new stick mechanics that finally got hockey games away from awkward button pushing of the last decade and a half were a very welcome sight.

This game was essentially the MVP 2003 of the series; very rough around the edges but simply laying the foundation for all the greatness that was to follow. The future editions didn't really add a whole lot but really built on a solid foundation.

2K however, since they really didn't build up the game again or really improve anything, nothing was changing for them. Most people up until that point basically just said they were the company to beat and they just sat back and watched. While there were rumors of EA buying the exclusive NHL license, 2K just sat around and stayed with their winning formula.  By no means had 2K had a Madden like run of dominance, but there were a good number of years outside of NHL 2004 where 2K held a distinct advantage. But like all good things, it had to come to an end.

NHL 08 wasn't as good as MVP 2004, but it really was one of the great games and was probably the last year where both games were close to even. There weren't really a whole mess of new features for EA's game except for goalie mode and the ability to design plays, which I rarely use. I created exactly one play and then forgot about it. But the AHL and many of its players were finally added so that was a plus. Controls were polished up and finely tuned to to take the game to the next level. 2K didn't quite fare as well.

I kid you not the features hyped for this game were next gen graphics, which EA's game had put in a year before and right stick controls. It's really almost laughable. You could also customize your style of play and use players' signature moves, which in EA's game you could probably replicate yourself. There was really absolutely nothing special in this game. For the first since NHL 2004, EA had completely wiped the floor with 2K. But at least they had Korn on the soundtrack. That's good enough? Right?

For NHL 09, EA Canada really didn't add anything new besides the defensive skill stick which was just a natural progression. There were also NHL 94 controls added but the ability to make the Great One's head bleed was sadly left out. They just went the MVP 2005 route and added just a little and fine tuned the rest to make the best possible hockey game they could. NHL 2K9 tried to just finely tune things but they were still a year behind. Their only new feature: playoff beards. While I'd love them in EA's series, they aren't exactly a deal breaker.

NHL 10 added a bunch of little things like battling on the boards, an underrated feature in hockey, and the ability to brawl Fight Night style. I'm still waiting for great fights like this one, but the NHL would probably frown on that. Again, just fine tuning and a few new features here and there. You can read our full review here. But for the 2K series, this would be its nadir.

Their big features were better control of the puck, something EA did waaaay back in 07 and slightly better graphics. Yawn. And with that and lacking sales, they've completely pulled out of the 360/PS3 market and left EA with essentially another monopoly. While they're still going to have games on the Wii for hockey gamers, the rest is left to the EA juggernaut.

NHL 11 looks to be the best yet with features like the Canadian Juniors coming into play and a new physics system to get rid of all the canned animations from years past. 2K's just out in the wilderness at this point waiting for NHL to fail since that's their only chance.

So why did all of this happen? How could everything swing so wildly in one direction following NHL 2005, where they actually took out features during the lockout year?

2K obviously should have built up from the beginning. There's a reason that they only have one major series left in NBA 2K, but even that faced some stiff competition from NBA Live last year (though Elite isn't looking too good). But really it all came down to EA figuring out the next great innovation for hockey games before 2K. They just found one thing in the right analog controls and just keep polishing it and tweaking it every year until we reach perfection.

Is this the year? Find out when we review NHL 11 soon. But in the meantime, stay tuned to pnosker.com for all your tech news and reviews.