It's not so hard to find companies with a "green" spin these days.  Former director of engineering at v-moda and engineer at Tivoli Audio, Aaron Fournier started Thinksound.  Using the minimum amount of packaging for his headphones with recycled paper and a very minimalist design, he has created a line of wooden earbuds.  The buds do not use an armature driver like those found in most of the others I have taken a look at, but rather use a standard driver.

I took a look at the Thinksound Rain earbuds to see how they stack up.  Like most in-ear buds above the entry level range, the Rain comes with a few different rubber flanged tips to find the best fit.  It also came in a fabric sack to hold everything, which I think is a very nice touch.  Unfortunately, upon first listen, they did not sound very good.  There was a muddiness similar to stock Apple earbuds that made me want to take them out.  Instead, I decided to let them burn in for several hours.  After coming back, they still did not sound great.  I was perplexed, so I covered the speaker and noticed that the noise didn't really cut down much.  It was leaking out the headphone cable junction with the wood earbud body.  Maybe this was why the sound quality wasn't very good. 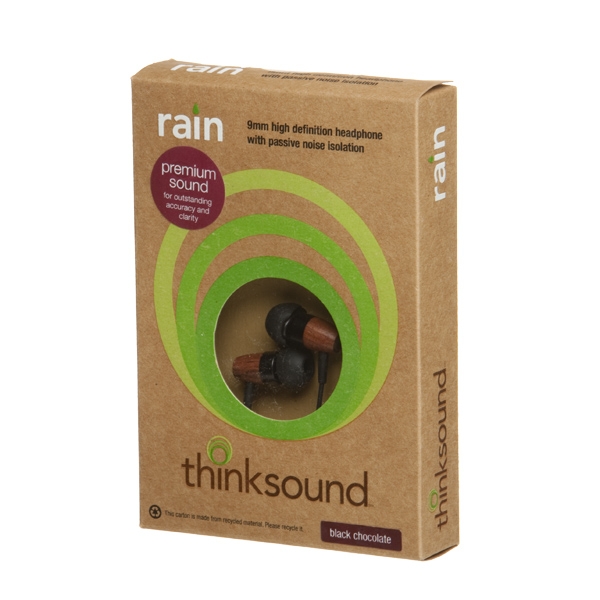 I then swapped the tips with a set of Comply foam tips I had lying around.  For some reason, this really helped the sound quality of the Rain.  Maybe it was the longer and more narrow tube that allowed the sound to bounce just right, but the produced sound got much better.  I wouldn't say it was great, but it was what it should have been.  It seems like Thinksound has a few little kinks to work out, and maybe their ts01 earbuds might sound a little better, but I think they can do it.  For a small company to try to make a product that is environmentally conscious, it's easy to have a few little issues.  I would recommend getting a set of Comply tips with these earbuds, and with their current street price, you would be very hard pressed to find a better eco-value.  You might be able to get better earbuds at this price (Etymotic ER-6i for instance), but you won't be able to rock wooden earbuds and say you're just trying to be green, and to most people, that looks pretty darn cool.

UPDATE: I sent back my set of Rain earbuds and Thinksound sent me a brand new set.  I am happy to announce that the second set sounded much better than the first.  I believe my first set were defective and did not have good isolation.  The second set sounds much more clear and full and I would not hesitate to recommend them.