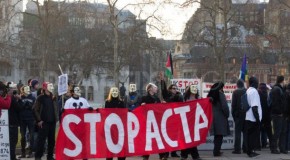 Dutch lawmakers have voted unanimously against the Anti-Counterfeiting Trade Agreement (ACTA), an international bill with severe repercussions against both free speech and information access. Although the EU’s vote is not scheduled until June, Holland’s

ACTA: Bulgaria and The Netherlands Withdraw Support In Response To Weekend Protests

Today Bulgarian and Dutch officials announced their withdrawal of support for the Anti-Counterfeiting Trade Agreement, better known as ACTA.  The move comes in response to massive protests that took place in almost 200 European

Tens of thousands of people marched in  coordinated protests in more than a dozen European cities Saturday against a controversial anti-online piracy trader agreement that  could limit Internet freedom.  Significant marches were held in