Republic Wireless, a division of Bandwidth.com, is launching a potentially, highly disruptive service today for beta testing. It’s called “Hybrid Calling” and could completely change the business models for wireless carriers. Customers who choose to go with Republic Wireless will be able to purchase an android phone for $199 and receive unlimited voice, data and text for only $19 a month! Oh and can I also mention NO contracts!

How is this possible? Well, instead of relying on the standard model the same way Verizon, AT&T and Sprint do, Republic Wireless is attempting to make Wi-Fi calling paramount and thus, is able to offer such a competitive rate on its data plans.

Republic Wireless has decided to take advantage of the fact that many of us are already surrounded by Wi-Fi networks, either at home or in the workplace, and uses these networks for a bulk of data operations. “Hybrid Calling” is a very straightforward idea in that, when a device has access to Wi-Fi, it uses that network to make calls, check email, etc. When the device falls outside of a Wi-Fi zone, it switches to 3G. As of right now, all users will hear is a slight tone to notify them of a switch; calls will not be dropped.  Brian Dally, the general manager of Republic expects at least 60% of traffic to go over Wi-Fi networks. But rest assured that unlimited data means just that, on a Wi-Fi network or not. 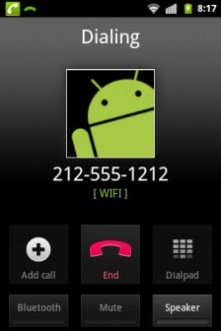 The first phone to use this system will be the LG Optimus which runs on the Gingerbread version of Android. It will come with Republic Wireless’ software preloaded. Once on, the phone will prompt its user to input information for all their Wi-Fi connections and remember them in order to switch automatically.

Republic Wireless has partnered up with Sprint to use their 3G service but this also means that because of Sprints CDMA network, international roaming is unavailable.

This is a radical shift away from the standard business model and a step in taking telecommunications away from the hands of a few enormous carriers. The company hopes to make telecommunications more IP-based, and hence, more open.  “The phone prefers WiFi because it is ubiquitous and cheap and it’s not controlled by a few large companies,” Dally said. Bandwidth.com in fact owns an IP network that Republic Wireless will use to connect calls that already provides VoIP services to the likes of Skype and Google Voice.

As mentioned earlier, beta testing starts today and Republic Wireless is offering to ship a few headsets every Friday based on a first-come-first-served basis. To sign up, simply go to the company’s website.