I'll be the first to admit it: before today, I'd never heard of MEElectronics (AKA MEE). But the young Californian company's self-stated goal of better sound at a lower price seemed promising enough. At $25, their new RX11 in-ear headphones certainly fit the "affordable" bit of the bill, so I decided to find out whether they delivered—whether MEE had kept the promise that everyone makes but most seem to break.

The RX11s are, in terms of design, inconspicuously functional among today's earbud masses. Yes, their bold red-on-black color scheme is attention-grabbing, but the rest of the engineering is much more sensible. The 3.5mm connector is angled at 45° so as to reduce pressure on the cord when it's in your pocket. The earbuds themselves are also angled, reducing fatigue from usage. They're small and subtle touches, but they make a difference.

I expected the RX11s to outperform competitors in its price range, but not by much. As a rule, fashion-oriented earbuds—MEE advertises the RX11s as "stylish" before talking about sound—have had more development effort/money sunk into aesthetics than sound quality, especially low-priced ones made by a small company. And as a result, they look and feel great but aren't really a step up, in terms of performance, from the white Apple earbuds that came with your iPod. Initially, I though MEE had followed this model, as the RX11s sounded rather tinny and harsh out of the box. After 12 hours of burn-in, however, the drivers really opened up and delivered warm, balanced sound. They won't blow in-ear reference monitors out of the water, but they're more than adequate for day-to-day listening. Heavily-scored orchestral pieces are clear; individual instruments remain distinct. George Thorogood's voice sounds rough and growly but not raspy. Vocals are sufficiently crisp and defined. The bass range is better than I expected, remaining free of distortion all the way down to 40Hz. Tones get progressively softer below 100Hz, but there's never any muddiness or wavering—it just gets quieter. And when playing tracks with heavy, constant bass (dubstep remixes of La Roux's Bulletproof come to mind), upper ranges aren't sacrificed when the drivers struggle to push the relentless bass line. 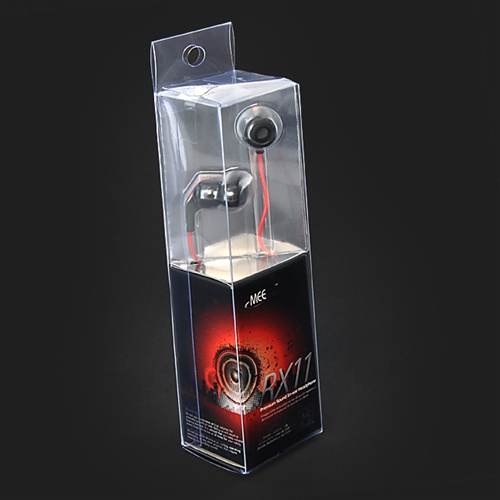 In short, then, MEE have done a good job with the RX11s. They're inexpensive, well-made, well-engineered headphones with class-leading sound. The build seems more than sturdy enough to stand up to prolonged abuse. If you're looking for a step up from your iPod headphones, these sound good enough for your everyday listening, feel strong enough for everyday mistreatment, and look stylish enough for an Apple enthusiast. That's what most people want and need—and, at $25, MEElectronics haven't priced them out of anyone's budget.