Google is selling its 29.4-million-share-stake in the struggling Clearwire for a paltry $47.1 million, a sizable markdown from the $500 million they paid for their 6.5% stake over three years ago. The transaction would 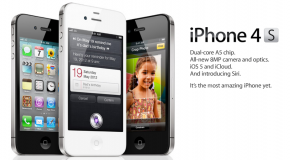 The iPhone 4S sold out

The iPhone 4S goes on sale on October 14th (tomorrow.) Since October 7th, exactly 1 week before the afore mentioned launch, Verizon, AT&T and Sprint all started accepting pre-orders. Even in the first few