Ultimate Ears is famed for making very good consumer level headphones but their origins lie in the performance market. Originally designed by Jerry Harvey to be used by on-stage musicians in lieu of wedge speakers, custom in-ear monitors have a few design goals in mind: provide isolation to reduce the amount of hearing-damaging noise from entering the ear, allow for proper audio reference for the artist to play with the rest of the band, and provide great sound quality for the same reason.

Things have changed with the advent of high fidelity recordings available to the consumer. Gone are the days of using earbuds packaged with your audio device. Even Apple is including wild designs in their provided earbuds. Now, consumers want great sound and quality.

Ultimate Ears makes many models of custom in-ear monitors for both the consumer and artists. They aren’t cheap, but if you consider the cost of your listening device (an iPhone 5 out of contract costs up to ~$800), the cost doesn’t seem all that crazy anymore. And, if you’re lucky, you will be able to use your custom in-ears for many years. When you buy your own set, though, you want to make sure you spend your hard-earned money on the correct ones for you.

You may be wondering why UE has so many products that seem to all be the same. The answer is that most of their products differ in sound signature. A drummer I met told me he preferred the $1150 UE11’s for the bass kick and that the extra punch made it easier for him to match beat with the bassist. A vocal musician mentioned how the $850 UE7 is perfect for her due to the clarity throughout her vocal range. Many smaller bands prefer the UE4 for the lower $400 price point. By now you should see two things: 1. Custom in-ears are expensive, and 2. UE products cover a wide range of application.

The various UE products with numbers at the end of the name all share a common trait– fantastic sound quality. They all have emphasis on some spectrum of sound however. The UERM are the product for the audiophile who wants a perfectly neutral sound. Now, the Personal Reference Monitor (PRM) is for the person who isn’t quite happy with any of their other products for one reason or another.

In my case, I have no qualms with any of UE’s products. I’ve heard them all in either the universal form for determining which model you want or my own customs. In each case, and with every other headphone I’ve used, I have an issue that makes hearing slightly different in both ears.

Several years ago when I was becoming certified for Scuba Diving I had a cold. I decided to do the certification dive anyway because I had already paid for the dive and it was only down to 40 feet. I figured it wouldn’t be a problem. On my way down, I had a lot of trouble equalizing. After the dive was complete, I noticed that after I surfaced, I could not hear out of my right ear well. A few weeks passed and I had a bad ear infection. I went to the hospital and the ER doctor mentioned how my ear drum had burst completely.

Months later I could hear again but everything was slightly off. I saw an audiologist and they said my hearing was about perfect with similar sensitivity between both ears, but I knew something was a little bit off.

When Chuck Reynolds, UE’s Director of Custom Sales showed me the proprietary tuning box used to customize the sound signature for the PRM, I knew this had the chance to correct for my sonic deficiency. The box has an audio input and two funky outputs– each connected to one PRM earpiece. On the unit are 3 sets of knobs, one for low, mid, and high frequencies and 2 buttons. The buttons allow you to reset the sound to neutral so you can see what the twists of the knobs do for you. You adjust the knobs from 0-100 to set your preferences and each side is different. 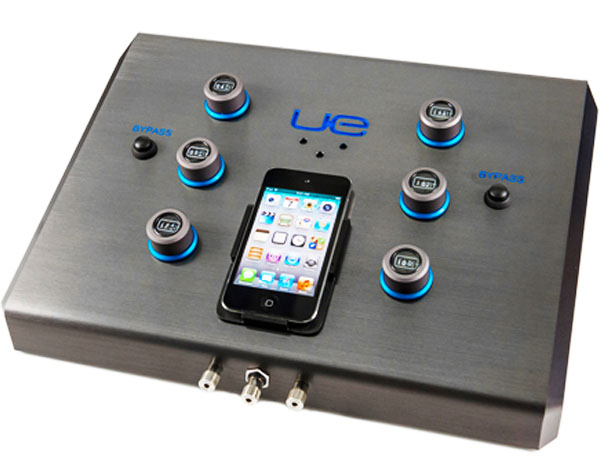 After finishing up, I knew I found what I was looking for. By adjusting the sound differently between ears, I was able to make music sound like it did before my diving injury. Now, UE was to take my settings and using various techniques (if you look at the pictures there is some new circuitry in there) sets each side to reflect your preferences.

The wait for the finished product was long and arduous, but after they arrived I knew I finally had what I needed to hear perfectly again. UE’s 18 Pro and UERM are extremely good custom in-ear monitors, but they just aren’t perfect for my now abnormal eardrums.

For everyone else, you probably don’t need to spend the extra thousand dollars to correct sound unless you aren’t happy with their other products. But, if you want exactly the sound you are looking for– and I mean exactly, the UE PRM are as custom as it gets. You get what you pay for here and if what you want is the complete ability to adjust sound to your taste, the UE PRM is your only real solution.

Yes, they cost $1999.00, but in the world of very high-end audio, you get what you pay for. You’re better off spending $2000 on a set of customs than $2300 on a set of headphone cables. And if you are OK with not getting quite this level of personalization, go for the half price Reference Monitors.

Looks like UE stuffed a potentiometer, resistors, and their specialized balanced armature drivers inside.