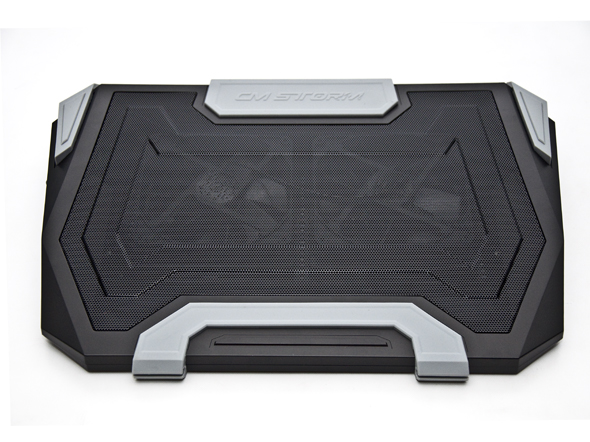 Cooling a desktop PC is easy. The large form factor and available fan space mean that airflow is a non-issue for most users, and those who spend their time in pursuit of every last drop of performance can simply switch to a more efficient, quieter water-cooling system.

Laptops, however, are an entirely different beast. Since you can't install more case fans, and water cooling is completely out of the question, your best bet when your laptop reaches thigh-scalding temperatures is a cooling pad. Cooler Master's SF-19 takes this idea to an extreme, providing–they say–all the temperature reduction you'll ever need for a laptop up to 19".

The wedge-shaped SF-19 has a very no-nonsense, angular, "stealth-fighter" design reminiscent of ASUS' G-series gaming notebooks. The frame is matte black plastic, and the edges are clad in thick, grippy rubber pads which pull double duty as cable routing ducts. Overall, the construction feels very solid: nothing feels thin or flimsy. Measuring 500x340x75mm (19.7"x13.4×3") and weighing in at 4.37 lbs, the SF-19 is probably considerably larger than any laptop you throw at it.

The pair of 140mm fans that lurk beneath the mesh surface are virtually silent at lower settings, but still move a considerable amount of air. But that's not surprising–I own mid-tower desktop cases with less fan area than the SF-19. The fans are easily removable and replaceable, which is great for maintenance, cleaning, and possibly upgrading.

The SF-19 also functions as a USB 2.0 hub (the slightly more expensive SF-19 Strike Force is USB 3.0 and is identifiable by its black, rather than gray, rubber pads), splitting one USB input into four ports. Also, the fans are powered by a separate AC adapter, so they won't steal USB power from your attached devices.

Lastly, the left side of the cooler houses the fan and LED controls. The frame has four LEDs that project light downward to create a glowing aura (it works best at night when there's little ambient light to compete with it). A separate button cycles the LEDs through seven different colors.

The SF-19's cooling capabilities were tested on a HP Envy 14 with a first-generation Intel Core i5-450. The processor was maxed out using Prime95 for 90 minutes at a time, and temperatures were recorded using CoreTemp 0.99.8. The laptop was allowed to cool for 10 minutes between tests.

The test was run three times, first as a control without the SF-19, then with the SF-19's fans at the lowest speed setting, and finally with the SF-19 spinning as fast as it would go. The results were conclusive, if unspectacular.

All in all, the SF-19 doesn't produce as dramatic of a temperature drop as its size and design would lead you to believe. It might make a bigger difference on a large 17" or 18" monster with more surface area, but in most other cases it's tough to justify. Your 13" ultraportable does not need a cooling pad four times larger than it is.

I like the SF-19. I like its rock-solid design, its ease of access, and its clever cable routing system. I like that it's also a perfectly usable USB hub. All the same, though, I find myself unable to recommend it for anything short of an ASUS G73 or an Alienware M17x. Partially because it won't make as much of an impact on a lesser machine, and partially because it's so huge your laptop might develop feelings of inadequacy sitting on top of it.